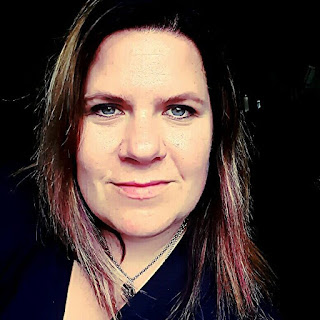 Have you read Twilight? Yeah, me too. I loved it but just like the other popular things in life, it has dimmed down to a more standard popularity. How about Fault in Our Stars? Paper Towns? John Green has quite the social media presence and has a way with words. So why would you want to branch out and read a book by a new author? Yes, my story is getting 4 and 5 star reviews but it only has 23 reviews. Fault in Our Stars has 36,124! I don’t blame you for doubting me and my work. To be honest, I would too. I mean 36,124 is REALLY impressive.

But Rarity is an amazing story that begged to be told. It is a fictional tale that is based on real life stories that I heard from others diagnosed with the rare disorder that Jay from Rarity was diagnosed with. Two years ago my son was diagnosed with this disorder and our lives were plunged deep into unknown territory. We had to learn about this disorder, the complications that occur, the life changes, the medications, and the emotional toll that our future held. It was overwhelming, like a tidal wave of sadness pushing me under. I fell into a deep pit and felt so low, so helpless. I did not want this for my child. I had dreams for him and a different life painted than the one handed to us… 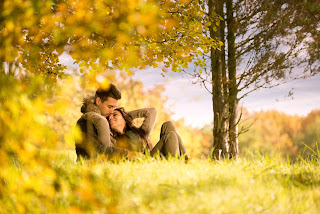 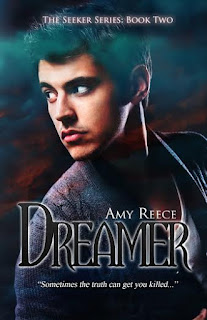 Meet Ally, a 17 year-old who also happens to be psychic. Oh, and she’s getting more psychic with every passing day, so much so that she’s been sent to Ireland to check in with the Seer Council to see what’s up with her freaky new powers.

Jack is her 19 year-old boyfriend, a former trouble-maker who is back on track and trying desperately to graduate. His plans did not include falling in love with psychic trouble-magnet.

Just last month they worked together to save a friend in deep trouble and ended up exposing a steroid ring at their school. Now there’s a new guy at school who seems just a little bit too interested in Ally for Jack’s liking. And why does Ally keep dreaming about a kidnapping? Last month seems like a cakewalk compared to this semester. Ally’s trying to solve a mystery, but Jack is just trying to keep her alive. 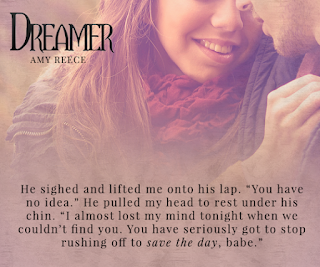 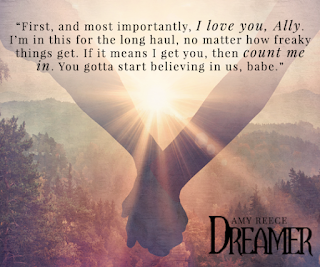 “Ally? Hey, what’s up? You got real quiet all of a sudden. Not a good quiet, either. What are you thinking?”
I shook my head. “No, it’s nothing. I get it. I understand.”
He looked at me for minute and then sighed. He got up and came around to my side of the booth and took me in his arms and kissed the top of my head. “You’ve got that look on your face. You know, the one that says you think I’m not going to be able to handle any more weird stuff and this is it for us. Huh? Admit it—it’s what you were thinking, isn’t it?” I nodded, trying to keep the tears in. “Okay, look at me.” He pulled my face up to look directly in my eyes. I could stare into his beautiful, deep brown eyes all day. “First, and most importantly, I love you, Ally. I’m in this for the long haul, no matter how freaky things get. If it means I get you, then count me in. You gotta start believing in us, babe.” He stopped to kiss me briefly and thank the waitress for refilling our coffee cups. “Secondly, you’re giving me, and all guys in general actually, way too much credit for deep thinking. When I say ‘what the hell is an oracle?’ that’s all I mean. No hidden meaning. I just want to know what it is. Guys are actually pretty simple and we tend to say exactly what we mean.” He kissed me again and then returned to his side of the table, placing a napkin in my hand so I could mop my face. Poor guy: it seems like all he ever did was watch me cry. I was such a girl. “Now let’s finish eating while you tell me all about this oracle stuff, okay?”
So I wiped my eyes and told him about how the Seer Council had tricked me into believing they were simply a group of innocent little old lady gardeners, but they actually held my fate in their hands. I told him about the last Oracle being stolen away from her people by the Gaulish clan, never to be heard from again. And I told him how the council was very interested in my abilities to see the future and seemed to think it was possible evidence of my oracle-ness or whatever. I finished with, “And they didn’t want to even let me go. They made me promise to come back over spring break and in the summer.”
“Spring break? Ah, Ally, no. I can’t stand not having our last school vacation together. You gotta tell them no, querida. I’ll probably go nuts if you’re gone.”
“Don’t worry. There is no way I’m going back over spring break. I’ll go in the summer as long as it’s while you’re gone to basic training.” I grabbed his hand across the table and rubbed my thumb over his knuckles. I told him what the council had told me about oracles, how they were messengers between worlds or something.
“Ally, what do you think? Do you think you could be this oracle?” He looked at me with concern.
“I don’t know, Jack. I think there’s a lot more to the story than what they’re telling me. I don’t trust those little old garden-seer ladies. I can’t even think about being an Oracle before I know what’s really going on.”
“That was a very Oracle-like thing to say,” he said with a laugh.

“Shut up.” I smiled. “Does this lunch include pie?” 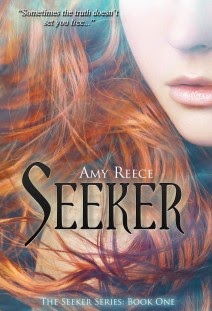 SEEKER
Author: Amy Reece
Series: The Seeker Series, #1
Genre: YA | Paranormal | Romance | Suspense
~ SYNOPSIS ~
Ally Moran has always just known about things—things she shouldn’t really be able to know… Suddenly when she starts having vivid visions about a former friend who is in desperate trouble, the adults in her life think she might hold the key to an ancient mystery. Jack Ruiz has a troubled past, but is trying to make a fresh start at a new high school… He just wants to keep his head down and graduate, hopefully before he turns 20. The last thing he needs is to get involved with a feisty redhead and her psychic visions. While Jack valiantly attempts to keep Ally at arm’s length, she is equally determined to be a part of his life. Who will win this battle of wills? More importantly… Can this unlikely couple work together to find answers to Ally’s visions before someone gets killed?
The Seeker is Book One is a Series
~ PURCHASE ~
AMAZON US | PAPERBACK 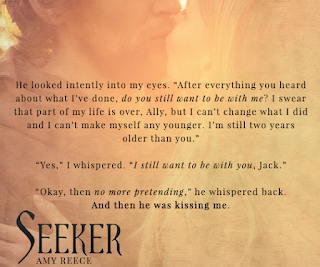 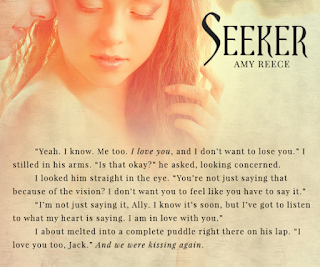 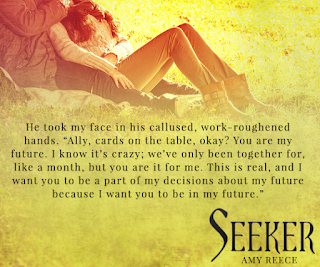 It was time to pull myself together and slink out of this bathroom to face Jack; if he was even waiting for me. He most likely lost interest and retreated back to class. I splashed water on my face and tried vainly to tame my obnoxious, curly red hair and exited the bathroom. To my surprise, Jack was leaning against the wall with his hands in his pockets, staring at the ground. He looked up and smiled slightly at me, one corner of his attractive mouth inching higher than the other. His big, nearly black eyes were full of concern as he asked, “You feeling better? I thought maybe you were gonna puke all over the place back there.”
Perfect. Exactly what I wanted him to think of in connection with me: the girl who looked like she was going to puke. “No, I’m fine. I needed to get away from the Wikipedia re-hash, that’s all. Thanks for the escape.” I tried to scoot by him.
He laughed a bit under his breath and reached out, gently grabbing my arm as I passed. “Hey, don’t run off. You looked really upset. I want to make sure you’re all right. Besides, Ms. Gonzalez thinks we’re at the nurse. No need to rush back for more coma-inducing book reports. I’m Jack, by the way. Jack Ruiz.” He pulled me directly in front of him and again examined my face. An intoxicating aroma wafted to me from his warm skin; a sort of warm, spicy scent that instantly became my new favorite. I might have swayed toward him a bit.
“Yeah, I know, Jack. I’ve been handing your papers back all semester.” I struggled to sound unaffected.
He nodded. “You still look really pale, Ally. And you seem a bit unsteady. Sure you’re not gonna puke?”
Really? Why me, God? I stood up straight and gently shrugged off his hand. “Yes. I had a, uh…a moment. I’m okay. Thanks for getting me out of there.” His dark eyes looked like melted dark chocolate. Life is so not fair. On the bright side, he actually knows my name. I wouldn’t have bet on that. I’m not the kind of girl who stands out—well, except for the crazy red hair—or attracts much attention. I’m short and small, wear really plain clothes, and I don’t say very much at school. I have a few good friends and we pretty much fly below the radar and try to stay out of the limelight. I like it that way. High school seriously sucks and I just want to get through it quietly and without a lot of drama. Please, God, life will be better in college.
“So, this is gonna sound pretty weird,” Jack started hesitantly, “but, uh, when it got really hot in the classroom, it, well it kinda felt like it was, uh, emanating from you.” He laughed once, quietly. “That’s crazy, huh?”
Wow. Did he just use the word “emanating” in a sentence? Who does that? I mean, in high school? I wonder what he got on his ACT? I had always had the sense there was more to him than meets the eye, and this cemented that feeling. 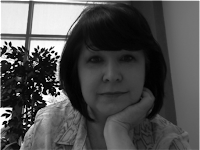 Amy Reece lives in Albuquerque, NM, with her husband and family. She loves to read and travel and has an unhealthy addiction to dogs. She loves wine and friends, in that order. Stay tuned for the rest of The Seeker Series, coming Summer and Fall 2015

I’m working with a woman to gain exposure for my writings.  I filled out several questionnaires, wrote a few blog posts…let’s see if it helps.