As a parent, you watch your child take their first steps, meet their developmental milestones, and begin to be independent. There are missteps and falls, bumps and bruises, and through them, they learn to brush themselves off and continue forward. But when your child has bruises and skin tears on a daily basis, you begin to suspect something is wrong.
My son was born a week early. He was born with a normal height and weight and looked like a cute little baby boy. He began dropping weight in the hospital and continued when I went home. This was very concerning to me as I had successfully breastfed my other two children and I knew my technique was working. I worked with a lactation consultant to pump my milk and attach a flexible thin straw to my nipple (with tape) so my son would learn to suck and we could measure how much milk he drank. It was an exhausting process and I often felt like a dairy cow being pumped or sucked 24/7. Despite our valiant efforts and our weekly weigh-ins, he stayed in the 3rd%tile for weight.
At 18 months old, he had met all his developmental milestones but his speech was intelligible to anyone besides myself. And although we had added solids to his diet, he seemed to give up or tire out after three bites and his weight remained low. We added First Steps Therapy, offered from the state of Indiana for infants through age 3. He received speech and OT (occupational therapy) regularly.
The OT suggested packing each bite full of calories and fat. We added Pediasure, a nutritional drink for children, and added Benecalorie to it which added more calories and protein to the drink. We soon got his weight up to the 25th%tile and felt we had a huge success.
We noticed our son bruised and got hurt easily, daily in fact. We had him buckled in to his booster seat at our wooden kitchen table. I watched as he paused between bites and sneezed. His head rocketed back and then came forward just as fast, smashing his forehead into the rounded table edge. He wailed as a goose egg appeared instantly on his head. We applied ice and tried to soothe him. When he wouldn’t tolerate the ice anymore, we removed it and watched the bruise continue to grow. His skin ripped from the pressure of the bruise, causing a fish-mouth-like bruise. We rushed him to the hospital and told them what had happened. They looked at us with disbelief. I didn’t blame them. How could his skin rip from a bruise? Thankfully they glued his forehead and sent us on our way.
Fast forward to Preschool… 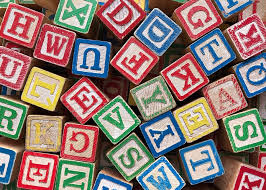 His teachers and therapists met with me and informed me that he had excelled at his speech therapies and no longer qualified for services. I knew I should be happy but part of me knew he needed more therapy. Our son struggled with his pencil grip as his fingers seemed excessively bendy. They agreed he would benefit from more therapy but could not offer it under the speech diagnosis and recommended we seek another diagnosis.
We went to a geneticist…
I went to our genetics appointment at the reputable Children’s Hospital in our city with a list of all the puzzle pieces that seemed to want to point to a diagnosis. I’d told the doctor that I’d searched the internet high and low, typing in different combinations of symptoms he presented with, including: bruising, nose bleeds, gets hurt easily, flat feet, sleeps with eyes open, apraxia of speech. He took that info and decided to test for Fragile X Syndrome. The results came back negative and the doctor said “I wish I was smart enough to know how these pieces go together but I’m just not seeing it.”
We returned to our pediatrician and she referred us to her favorite geneticist at the teaching hospital downtown. The doctor walked in and listened to our tale. He performed the Beighton test on my son, a test of various movements to check hypermobility of joints, and when he was done he said, “he has Ehlers-Danlos Syndrome type 3”.
I quickly googled and discovered that Ehlers-Danlos Syndrome (EDS) type 3 is a collagen disorder. Patients often have low muscle tone, especially in their large joints like hips, knees, and shoulders. Patients live a normal life span but are often ridden with severe pain and dislocations. Some also have POTS, a condition where blood pressure drops suddenly, and/or dysautonomia, an irregularity of the nervous system that causes your body to overreact or underreact to stimuli. As I continued to read, it mentioned EDS type 4 or the vascular type, and stated that it was the deadly type leading to a shortened life span. It included easy bruising, fish-mouth like wounds, veiny chests, and small chins. It included pictures of patients with the condition and they all had a similar appearance to them. I compared them to my son and worried he might have type 4.
I asked the doctor if we could rule type 4 out as my mind would always worry whenever my son was injured. He said he doubted he had it as it was a rare condition but said we could do a blood test to rule it out. 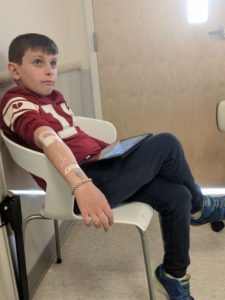 But life wasn’t over.
We all were still alive. I was still a mom, a wife, a daughter, a sister…and rather than let this destroy me, I needed to rise up and do whatever I could to help my son. I educated myself on the condition and made a list of what I needed to do so that if anything horrible were to happen, there would be no regrets. Here was my list:
-Get a medical bracelet 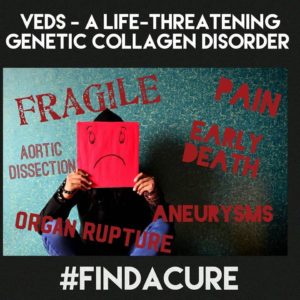 -Educate all his caregivers about vEDS
-Raise Awareness
-Raise money for research
-Take him to the best doctors in the nation regarding vEDS
-Make memories with my entire family and value every moment with them
And I can proudly say that I have accomplished all of these tasks. I’ve written two books with characters challenged with vEDS, including Cross, which was awarded a silver in the International Literacy Classics Awards.
Sadly, many parents of children with vEDS get accused of abusing their children. I honestly can understand why as these children have new bruises on any and every part of their bodies and CPS wants to protect children from abusers. It’s important for hospital staff, police, school, and CPS to consider other reasons for the bruising. This is a rare condition but it exists and too often families have not been properly diagnosed.
I volunteer at my son’s school by helping out in the classroom or in the gardens and I’ve developed a close relationship with the staff that work with him. I do this so they can feel comfortable asking me any questions they have and I do this so they can see what kind of parent I am. My son runs up to me with big smiles and kisses and hugs me when he seems me. He’s glued to my side and I hug and kiss him back. Parents with children who have vEDS should consider being active within their child’s school and building relationships with their education team.
He comes home with new bruises and injuries everyday, but he’s alive and happy. We are always trying to balance life experiences with safety and care for his body. It’s not easy, but he’s becoming more understanding of his limitations and his disorder as he gets older. For now, we’ll take each day as it comes, being grateful for our health. 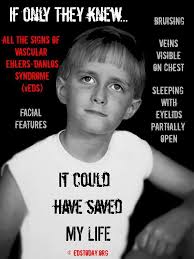