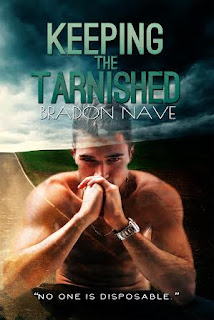 KEEPING THE TARNISHED by Bradon Nave
Genre: Psychological Thriller
Publisher: Limitless Publishing
Release Date: Nov. 3, 2015
– SYNOPSIS –
Johnny Tregalis leaves home the minute he turns eighteen, but he’s the only one who knows why…
Arriving in Lake Charles, Louisiana, Johnny has nothing—not even a plan. Local veterinarian Jackson Everett notices the boy, who reminds him of his own teenage son, and offers him a bed for the night.
Meeting Jackson’s wife Graye, his son Jared, and four-year-old daughter Bryce, Johnny sees a family he could never imagine. He’d been raised by his abusive father after his mother disappeared with his younger brother, and he’s sure he’ll be packed off to a shelter in the morning. He can’t believe it when he’s invited to stay indefinitely.
Johnny refuses to discuss his traumatic past as he attempts to fit in…
The Everetts try to help the profoundly troubled teen, but he seems to be at the mercy of his own mind. He’s held captive by flashbacks, excruciating night terrors, and a mounting inability to distinguish delusion from reality. How can he possibly recover, go to school, have friends…have a life?
Physical scars only hint at deeper psychological devastation…
As the shocking truth comes to light, Johnny struggles to overcome years of abuse, poverty, and despicable horrors to become part of a real family, but is he strong enough to defeat his demons? The Everetts realize Johnny’s journey is now their own, but they face a daunting task.
How much sacrifice is too much when all you can hope for is keeping the tarnished?
– PRE-ORDER –
AMAZON US: http://amzn.to/1kJWubT
AMAZON UK: http://amzn.to/1S7pFAE

– EXCERPT –
Midnight. Finally. The moments leading up to it had crawled slower than one of the maggots behind the kitchen trashcan, etching its way blindly through the coffee grounds and eggshells. He grabbed his weathered book bag full of a few clothing items and $188.00 in cash, and then stuck his leg out the window, arching his back as he felt his foot touch the ground outside. He pushed against the house, dragging his other leg across the bottom of the window frame as he lost his balance and fell backward to the ground. He didn’t care. He had been outside of this rundown shack a million times, but never had he been outside and free. Even if this freedom were short lived, and he went in the ground tomorrow, he owned it for this moment.
Quickly, he sprang to his feet, grabbed his bag, and began running in the direction of the cornfield near the end of the farmhouse drive.
The air was eerily still on this night. All was silent with the exception of a few chanting crickets and the occasional cry of the whippoorwill sounding out over the horizon. The moonlight illuminated the decrepit barn to the north of the house, as every single cornstalk in the field up ahead seemed to be reflecting the moon’s rays.
The yellow light bulb atop the wooden pole near the end of the drive was bright and buzzing in a calming manner. Several fat toads sat at the base, waiting for unfortunate insects to fall to the ground from their dizzy escapades near the globe at the top of the pole.
He ran past the half-built clubhouse his father and Uncle Doug had begun several years prior. He never understood if Doug was actually his uncle, but the men had wanted to build a ‘guy’s getaway’ for the three of them. He paid little attention to the details. He’d seen it all before hundreds of times, and he hoped to never see this place again.
Leaping over old car parts and garbage, he finally reached the corn. Although it wasn’t tall enough to hide him completely, it was all the cover he needed to make an effective escape. His heart raced wildly as he ran feverishly over the soft earth through the chest-high stalks. He began to smile through his heavy breathing, running—sprinting—excited as if he were scratching off the winning number on a substantial lottery ticket.
The prospects raced through his mind, and no adversity outside of his former confinements seemed to scare him. Starvation, disease, injury: nothing conjured concern except the idea of returning. He couldn’t go back, not now, now that a glimmer of hope had been resurrected.
As he bounded through the field like a fawn that had been mercifully released from the jaws of a predator, he felt as if he were being lifted off the ground; as if he were flying, and nothing in this world or the next could anchor him.
The taste of freedom was that of a bloodied lip, cornstalks, and the occasional mosquito; it was delicious. He knew he would leverage everything to maintain all he had in that moment, which was merely a tattered wardrobe, his father’s liquor-cash reserve, the worn clothing in the backpack, and a desperate desire to exist.
Hyper-vigilant and full of life, one would never have known only seven minutes prior he was a prisoner of technicality and his bedroom. Like a thief in the night, lowly and cunning, he darted through the cover, running on what seemed to be an endless rush of endorphins and adrenaline.
He was running for his life; this reality gave him wings.
The air was heavy and stagnant and seemed to fill his lungs with a thick, boggy perfume. He knew for certain that, if there were a higher power within the heavens, it would not have him come this far to go back. Even if he were found right now he knew he would die before he went back, and he would die a free man. Yes, a man. No longer a boy and no longer bound to his bedroom—to that shack—by the law. With a head full of dreams and the legs of a gazelle, he shot through the field, promising himself to never look back. 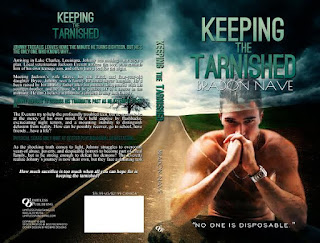 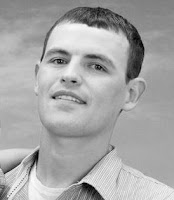 Bradon Nave was born and raised in rural Oklahoma. He attended a small country school during junior high and high school, and graduated with only three people in his class. After graduate school, he decided to devote his spare time to his passion of writing.Bradon currently lives in Piedmont, Oklahoma, with his wife and two young children.
When he’s not writing, he loves running, being with friends and family, and being outdoors.
Limitless Publishing | Facebook | Twitter | Google + | Website

Meet Skylar Rankin, One of the Midnight Oil Anthology Authors!

Cover Reveal for the much anticipated Thriller Anthology…13!

Happy November – The latest news in my literary world